Saving Private Ryan (1998), directed by Steven Spielberg, is an epic war film based on a true story. Set during the Invasion of Normandy (1944, World War II), it follows the story of Captain John H. Miller (played by Tom Hanks) and his squad. Their mission is to find and bring back a soldier, James Ryan, whose three brothers were declared dead in battle.

Steven Spielberg wanted to make this movie as realistic as possible by using amazing sound effects that fit perfectly with the images. 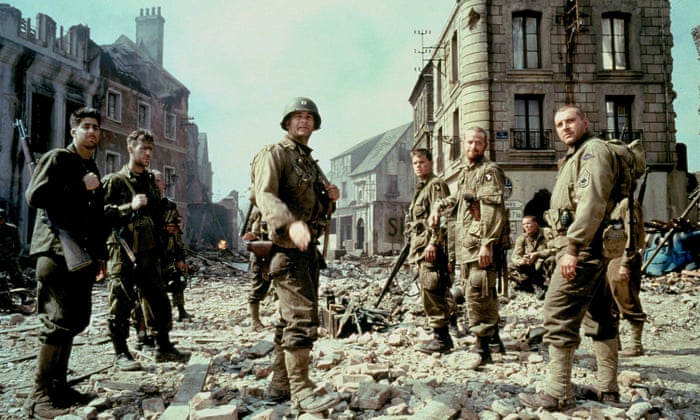 The movie doesn’t contain a lot of music and that’s the whole point. In a way, music makes the audience realize that they are watching a movie. Therefore, the lack of music is a way, especially for a war film, to make the audience more immersed in the movie.

However, music brings out emotion. Saving Private Ryan contains many depressing and affecting scenes. Using an appropriated music type in a specific scene can make the audience feel a particular emotion, even more when the movie is not overloaded of music like this one.

The Omaha Beach invasion is one of the first scene of the movie. It includes many sound technics to make it more immersive and realistic.

“I didn’t want to shoot the picture in a way that would seem like a Hollywood production coming to Omaha beach and making a gung-ho extravaganza. This is really trying to approximate the look and smells of what battle and combat is really like” – Steven Spielberg

We can hear bullets flying by and impacting objects on the beach, explosions, soldiers screams. Also, the sound of the orders given and the medics trying to save the soldiers, all of this help the audience to experience the overall sounds of a battle.

In this scene, the American army lands on the beach with landing crafts. As soon as they open the ramp, we can hear machinegun fire, bullets hitting the soldiers, explosions. This is a way to immerse directly the audience in the battle mood.

The soldiers must land in the water to get on the beach. Here, a useful sound effect is used when the camera follows the character to the shore. It goes under and over water several times and when it is dipped in water the sound is muted to get this impression of being in the camera’s place.

Once on the shore, an artillery shell explodes near the main character, Captain Miller. From this moment, the sound is muted (very muffled) to make the audience in the character’s place in order to highlight the chaos of the battle. Moreover, it allows to focus on what happens around: soldiers killed, burning or just too scared to move.

Here is the scene (WARNING this scene contains violence):

Saving Private Ryan is an amazing movie thanks to the realistic feel of the battle it provides. Using many different sound design technics, Steven Spielberg place the audience directly into the battle experience.

This site uses Akismet to reduce spam. Learn how your comment data is processed.